SkyLens is a receiver network solution for 868 MHz electronic conspicuity systems such as FLARM, ADS-B, and ADS-L. It uses off-the-shelf hardware and secure communication for great performance, security, and scalability at a low cost. SkyLens is suitable for deployments of any size: From local installations with a few receiver nodes to large-scale networks with hundreds of receivers. Applications range from situational awareness for small airfields, fleet management, and tracking to large U-Space or ATC deployments.

SkyLens uses software-defined radios (SDR) for receiving and decoding radio signals. SDRs offer a very high effective reception range. SkyLens can receive E-Conspicuity signals on different frequencies and following differing parameters (e.g., the modulation) concurrently. All versions of the FLARM radio protocol are currently supported. ADS-L on 868 and 869 MHz will be supported once the standard is released. Other variants on request. ADS-B on 1090 MHz is supported on request, requiring additional SDR receiver hardware. 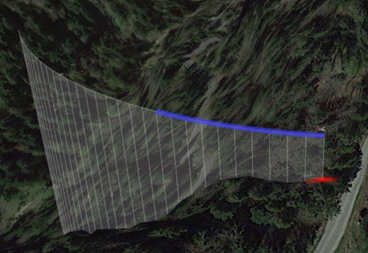 A SkyLens deployment consists of several receiver nodes (SkyLens Node) and a server (SkyLens Server). Every node connects to the server over a bandwidth-efficient protocol based on MQTT. Secure encryption is available using TLS, including authentication using certificates. SkyLens Node runs standard on a Raspberry Pi 4 for which a complete SD card image is available. Installation on other single-board computers is possible via the dpkg installation mechanism.

SkyLens Server receives and consolidates the data stream from various receiver nodes. Since it is possible for aircraft to use more than one e-Conspicuity system, SkyLens Server merges the different data sources and removes duplicate signals. Clients can subscribe to easy-to-parse JSON streams to consume the resulting data. Installation and updates are simple: SkyLens Server is delivered as a Docker image and can thus run on many platforms. SaaS / Cloud deployments are also available.

SkyLens Node uses one processor core per e-Conspicuity system it is concurrently receiving. Unused processor cores can be assigned to other tasks, such as ADS-B 1090 reception (requires an additional SDR). 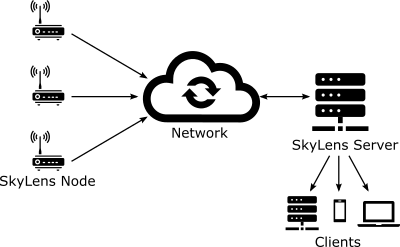