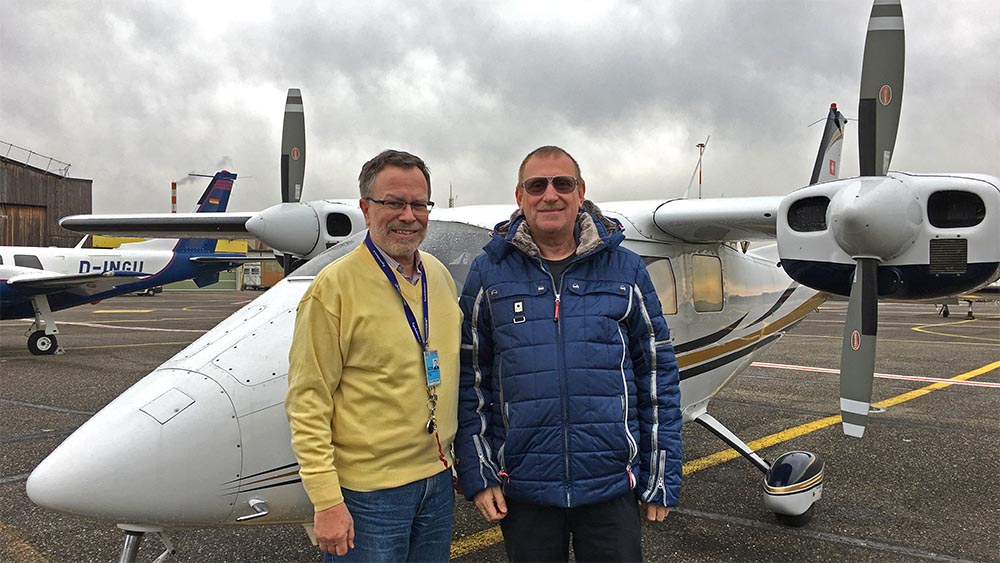 Basel Flight School is located at the tripoint between Germany, Switzerland and France, at Basel international airport. The school was founded in 1967 and was one of the first flight schools to equip its fleet with a FLARM collision avoidance system. All aircraft, a variety of Piper and Tecnam training airplanes, were equipped almost 10 years ago – except for one. For a variety of reasons, the oldest airplane, an almost 40 years old Piper Turbo Arrow, was not equipped. Regrettably, this exact airplane was involved in a mid-air collision in January 2018. It collided over southern Germany with an EC-135 helicopter from the German air ambulance operator DRF Luftrettung. The instructor and student in the Piper as well as the crew in the helicopter died in the crash.

The EC-135 helicopter, like many helicopters in Germany, was equipped with FLARM. That did unfortunately not help in this case, since this Piper did not have FLARM, as mentioned above. Would it also have been equipped, it would almost certainly have avoided the disaster. Thomas Wittwer, Chief Flying Instructor at Basel Flight School, says that today he makes sure that all aircraft that he flies have an operating FLARM system. We met Thomas at the flight school during a rainy morning in March, while preparing a proficiency check with his student Pierre Troendle in his own Partenavia P.68 twin.

Thomas, why did you install FLARM in your aircraft fleet?

I have been flying many different aircraft types for over 30 years and have over 12.000 flight hours, most of which as an instructor. During my carrier, I have had three serious airprox incidents. The closest was around five years ago when I was flying an airplane in Germany that didn’t have FLARM. Close to a glider site, coming from nowhere, a glider crossed just in front of us at the same altitude. He passed from right to left and obviously didn’t see us either. We passed just a few meters behind him.

The third time was in a military training aircraft. Suddenly, the student says to me: “Look, the sky is on fire”. It took a few seconds until I realized that two Tornado fighter jets were coming straight at us at high speed. I quickly banked the aircraft to increase the chance that they see us, which they did about 2 seconds before impact. Both started turning and one passed to our left and one to our right.

I think I have had enough luck not to want to risk anything like this again. Since I started using FLARM, I haven’t had any similar incidents.

What has been your experience using FLARM?

It has saved me four times, where I didn’t see the other aircraft before I got the FLARM collision warning. I never fly without FLARM anymore. For example for today’s flight, Pierre doesn’t yet have FLARM installed in his aircraft, so I’m bringing the PowerFLARM Portable with me. Pierre has been interested in installing FLARM for a while, so this is also a great opportunity for him to try it out. 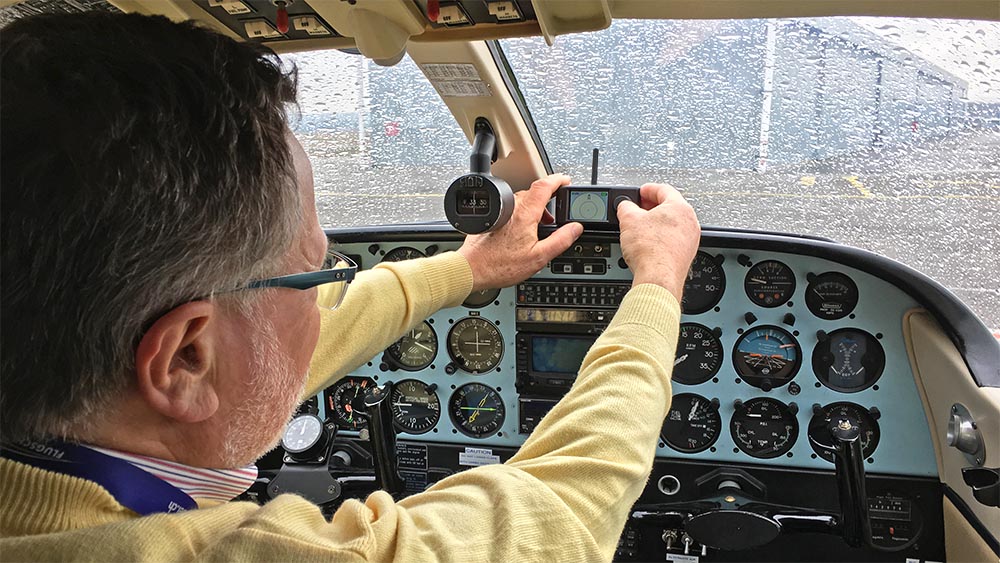 Pierre Troendle setting up the PowerFLARM Portable for the flight.

What do your students and instructors say about FLARM?

If you ask any instructor with a few years in the business, they have all had at least one serious airprox. The problem is that we generally don’t talk about these incidents. That’s of course not good from a safety perspective. Most instructors that I know love FLARM once they have used it.

And many students are shocked by the number of aircraft out there that cannot be seen otherwise. Many are not in contact with ATS so there is no way of being alerted of an impending collision without a collision avoidance system. Luckily, most aircraft in Switzerland and Germany carry FLARM. For other aircraft, PowerFLARM, which we now have, can also receive and warn about transponder and ADS-B Out equipped aircraft.

Are there any challenges using FLARM?

I think the most important one is training. Airline pilots receive both theoretical and simulator training about TCAS. Many GA pilots however have no FLARM training. The system just sits there. First, it’s important to realize that it’s a collision avoidance system and not a map you should constantly be looking at. Second, you need a strategy what to do when you get a collision warning. You should first try to visually acquire the other aircraft. But many people don’t realize that if you cannot see the other aircraft, you still have to do something! The risk is otherwise high that you will collide. From this perspective, I like the LED FLARM displays, because they focus on the collision warnings and don’t steal instrument time.

Another thing is to ensure that the antenna installation is done properly. FLARM uses low power to reduce frequency congestion, and thus doesn’t suffer from the same problems as the 1090 MHz frequency. However, this also makes the antenna installation important. We currently use the internal antennas and have sufficient range in most directions. Some of the aircraft however have limited range is some directions, so we will soon start installing the external AV-75 antennas on the aircraft.

What do you recommend as a resolution when receiving a collision warning?

Either make a 90 degree turn (left or right) or change altitude, based on the circumstances. And realize that you have to act immediately. When you receive the first collision warning, you have no more than 18 seconds to the collision, minus the time you spend looking for the aircraft.

Are there any disadvantages with FLARM?

The only one I can think of is that not all aircraft have FLARM. It should be mandatory for all light aircraft. Many more lives could be saved if everyone had FLARM. We are halfway there in Europe and even more so in Switzerland. But the last percentile is always the most difficult.

Why do you think FLARM has become so prominent in the last years?

First, there are more aircraft today than a few years ago. But what I think is even more important is that airspace has become much more complex, so VFR pilots have to rely on moving map systems to a greater extent. Nobody wants an airspace infringement and subsequent fine. This leads to pilots looking down instead of out the window. This of course increases the risk of a mid-air collision.

What would you say to other flight schools and flying clubs that don’t yet have FLARM?

What are you waiting for? FLARM is proven to have saved many lives. The system is not expensive. There is simply no excuse today not to have FLARM. And make sure that all students and members receive some basic FLARM training, so they know what to do when they receive a collision warning. Your club members and students will thank you.

Thank you very much for the chat. And have a nice flight!

Thank you, I’m sure we will.